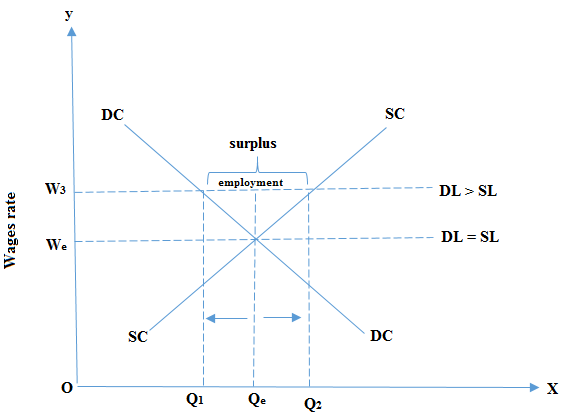 At the equilibrium wage rate Owe , DL = SL ;there is no surplus labor in the market but however when the wage rate increases from Owe to Ow3, demand for labor reduce but however supply for labor decrease and hence resulting into surplus labor in the market. Q1 – Q2.
Causes of unemployment in LDC’s
High population growth rate: LDC’s have high population growth rate due to high birth rate, this tends to results in to excessive labor supply which cannot easily be absorbed in production activities.
The defective education system: Is also responsible for high level of unemployment in LDC’s on the following grounds
It produces more job seekers other than job creators
it is more the original than practical
It prepares more for white collar jobs which are very few
It is not flexible with ever changing demand in the labor market
Technological progress; Many LDC’s are advancing interms of technology and therefore they are being able to come up with techniques of production.eg. the increasing use of computers such progress has resulted into decrease in demand for labor
Lack of serious manpower planning: Many LDC lack serious manpower planning whereby as they train labor,they don’t project employment opportunities that can be created as a result of this,they tend to produce excessive labor in different professions.
Political Instabilities: Many LDC’s have experienced political instabilities as a result of wars, this has resulted into contraction in many economic activities as a result of investors with drawing themselves from various activities.
Climatic changes is responsible for unemployment in LDC’s due to the fact that they are many major economic activities that depend on the prevailing climate like agriculture, tourism, mining etc
Poverty is one of the major problem that is experienced in many LDC’s and it has contributed alot to unemployment in the following ways:-
Low level of education.
Low demand of goods and services.
Lack capital engaged in different economic activities.
The inadequate information system in the labor market is also responsible for unemployment in LDC’s as it contributes to labor immobility.
Effects of Unemployment
POSITIVE EFFECTS
It helps to control inflation (Demand Pull) due to low demand of goods & services.
It help to lower the cost of production since during unemployment the employee’s fear to ask for higher wages.
It helps to improve discipline of the workers as those employed tend to look themselves as being lucky and hence more effort.
It helps firms to recruit the best workers due to higher turn up for application
It result in to the promotion of entrepreneurship since the unemployed tend to be more creative and innovative on how to service.
NEGATIVE EFFECTS
It lowers the standard of living due to lack of income.
It increases the dependents burden which lowers saving capacity
Increase in social evils such as theft, prostitution etc
It increases the burden to the government eg. in providing unemployment benefit
It increases destruction of natural resources due to poverty eg. cutting of trees, construction in swamps etc.
It lowers the tax base and hence the government realize less revenue from taxation.
Unemployment also results into income inequality and hence creation of classes.
Unemployment also results into decline in the size of a national income by the amount that would be produced by the unemployed

Measures that can be taken to control unemployment in LDC’s

The danger of inflation is increased. There are two reasons for this:-
Over investment is likely to occur
Due to changes of inflation, the government may be inclined to undertake too much investment and so a connection of inflation will be induced, with the demand for labor greater than supply
The wages policy of the trade unions
Full employment puts the trade unions in a strong bargaining. At times of depression, trade unions have to submit to some reduction in money wage and wait for times of boom to secure wage increases for their member. During over full employment, there is shortage of labor if the wages are high, the cost will be passed to consumers and hence rise in prices, which intern give rise to further demand for wage increase.
A distributional of resources may occur, another serious danger is that economic resources will not easily move from one occupation to another. If economic forces are not allowed to determine the distribution of factors among different occupation, the assortment of goods produced will not be that which the community as a whole prefers.
The quality of labor may fall.This is due to high demand of labor makes it possible for the least efficient workers to secure employment and also the removal of losing one’s job may often subconsciously cause many workers to put forward less effort,some many deliberately slack
Natural Unemployment/ Equilibrium rate of Unemployment
Natural unemployment can as well be called;Equilibrium unemployment.Therefore, Natural Unemployment is the combination of the functional structural unemployment that that persist in efficient,expanding economy when labour and resource markets are in equilibrium.
Natural unemployment exist when economy is at full employment,which for practical purpose is defined as the condition in which the quantity of resources demanded is equal to the quantity of resources supplied.Most important for policy purpose,natural employment exists with stable price, that has no inflation.
Non accelerating inflation rate of unemployment (NAIRU)
This is the type of unemployment which exists when the labor market clears with demand for labor is equal to supply of labor.
Natural unemployment exists at full employment when the lab our market is at equilibrium.

15 Things You Should Never Do at an Interview