Agriculture is the branch of science which deals with crop cultivation and animal keeping.

It is categorized as a primary activity since it involves the production of raw materials that can be used by other industries.

It is the type of agriculture (crop cultivation) where a farmer owns a piece of land covers less than 5 hectares.

1. Labor force involves the use of members of the families

2. Implication of simple tools like hoes, pangas to cultivate and few cases they use animals.

3. There are varieties of ways to improve the fertility such as the use of organic manure, mulching (covering the top soil with dead crops and animal remains to retain moisture),

4. Many crops are grown at once. You can find the farm with mixed crops such as beans, maize, sunflower and some watermelon.

5. Very little or no surplus. This is because subsistence agriculture is for consumption.

6. The land cultivated for subsistence farming is always small

7. Little or no use of technology inform of seeds, manure and tools.

Over population is sometimes called population pressure Continuous increase in the number of people is serious problem facing small scale agriculture because: it reduces the average size of land, results to over exploitation which lead to reduced soil fertility.

In the other side increasing population has increased amount of labour force in agriculture.

i) It is costless because easy to control farm work

iii) Provide employments to the family members Disadvantages Difficult in applications of machines such as tractors is because of small farming size.

Low productivity hence poor standard of living Gender imbalance: because women are not involved in land heritage and ownership Heritage of land leads to land fragmentation and over population in a small piece of land hence results into shortage of land

There are two types of small scale agriculture;

Is the system in which a peasant keeps on shifting from one area to another as a result of soil exhaustion.

In this type of agriculture peasants cultivates certain piece of land until the soil is exhausted after 2-5 years then shifts to a new piece of land where he cleans and cultivates.

It is the oldest method.

The cultivators do not have permanent settlements since they expect to leave any time , sites are selected in the virgin forest and therefore tend to be fertile

1) More than one crop can be harvested in a plot

2) Burning involves production of ashes which assist in soil fertility

5) Family labour is used in the production process

3) The system can be applied on the low populated areas

4) Low productivity because the plots are small and due to poor control of pests and diseases.

5) Destruction of ozone layer due to burning of bushes and grasses.

Is the system of farming in which peasant cultivates in a certain area until it gets exhausted and leave it for a certain period of time to regain its fertility.

It differs from shifting cultivation in that farmers are settled and hence are rotating rather than shifting to a new home.

Rotational bush fallowing is the simplest form of sedentary farming. This system took place after shifting cultivation failed to perform well due to increase in population.

The community can involve or engage itself into other activities like fishing, hunting etc Farmers are settled but the farms are the ones which are rotating.

Since the people are settled they engage fully and effectively in the production process. Slashing and burning involved in the farm preparation adds fertility to the land Fallowing gives room for the improvement of the soil and encourages the recovery of vegetation

How small scale agriculture is improved In order to improve small scale farming the following should be done i.e.

i) Proper ways of using fertilizers and pesticides etc

iv) Farmers should be given loans

Is a type of agriculture which takes place in a large area of land approximately 100 hectares. This is also known as commercial agriculture or state agriculture.

The money gained from large scale agriculture is essential for keeping the system going on. The type of farming practiced is normally monoculture.

In developing countries monoculture is associated with tropical and sub-tropical plantations which were established through European colonization.

The most pronounced from large scale agriculture is plantation agriculture 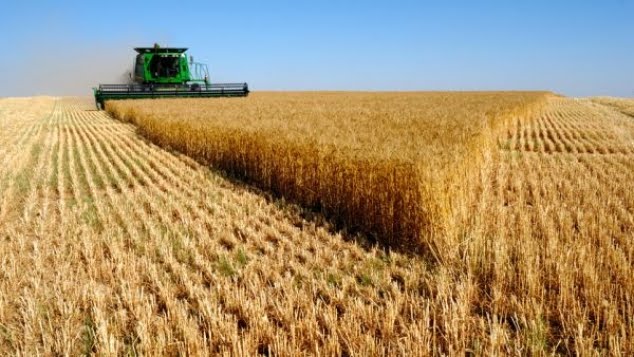 Involves the production of cash crops Only one crop is produced [monoculture] Farms are very large found in sparsely populated areas Use of high levels of technology [tools are very much modern ] hence high capital. It involve the use of skilled and unskilled labourers.

2) Risk of pests and diseases is highly reduced

3) Promotes the growth of other sectors

5) Provides employment to the people.

6) It is the source of foreign money exchange.

5) It involves the exploitation of workers

7) It may cause separation of people away from home.

(1) Population increase which resulted into short age of land.

(3) Loss of soil fertility due to the act of practicing monoculture. How large scale agriculture is improved.

(5) The Government should improve transport and communication systems such as railways, roads etc.

(7) The Government should provide loans/capital to the farmers

Refers to the large farm or large area of land designed for agricultural growth. Often includes housing for the owner and workers. The crops planted for commercial purposes.

The major crops grown in plantation agriculture includes the following.

There are several types of coffee but the famous ones are three;

a) Arabica; Have large leaves and can grow to 9m high; It has the finest flavor

b) Robusta; They grow up to 5m tall

c) Liberica; It is a low land coffee Uses of coffee Beverage packing Source of income Leaves are used as medicine to treat stomach aches Trees are used as fire wood Pulps are used for fertilizers

The chief producers of coffee in the world are such as; Brazil Columbia Ivory coast. And the other percent comes from Mexico Uganda Indonesia Ethiopia India In Tanzania coffee is produced in Mbeya, Arusha, Kilimanjaro and Bukoba.

The wheat yields in the world are highest from countries of Western Europe. The following are leading producers of wheat: Russia, USA, China, India, Canada France, Turkey, Australia, Pakistani, German, Romania, Italy and Argentina. In East Africa, Kenya is the leading procedure of wheat followed by Tanzania.

Livestock are kept in one permanent place. Food and water are brought to the animals hence zero grazing because no grazing is involved.

Pastoralism is an economic activity which involves grazing livestock (animals) on natural pastures. The pure pastoral societies of East Africa include: Maasai, Karamajong. The cultivator pastoralists (mixed farmers) include the Sukuma, Gogo and Nyamwezi.

Is practiced by wondering groups of people in remote areas especially semi –desert and desert areas.

Nomads are members of a group of people who having no fixed home, move around seasonally in search of food and water.

They keep on moving looking for water and grazing land (pasture)

(i) Animals i.e. cattle are kept for prestige, for paying bride gift, for food and for sale.

(ii) The breeding process is uncontrolled

(iii) The herds are large in size

(iv) There is poor control of pests and other diseases

(v) The animals are of poor quality and low value

(vi) It takes place where the population is scarce

(viii) There is no crop cultivation and therefore animals are the support for family life.

(ix) There is poor or no use of technology.

i) It is cheap

i) The animals produce little milk and of low value

iv) Many animals perish due to lack of pests control

This is the system of livestock keeping in which a farmer has started selling and began growing crops to supplement pastoral activities.

The farmers travel from their home state with their herds to distant places grazing, in search of pasture and water especially during the dry season.

This is a system of livestock keeping where by a farmer keeps animals while settled permanently in one place.

i) Population increase has decreased the size of the pasture

ii) Involvement of farmers in other economic activities

i) More advanced technology is used

ii) The number of animals is not so high

iii) The animals are kept in shades

iv) There is disease control

v) It can be practiced in relatively densely populated areas e.g. town

i) The animals are healthy and hence have high yields

ii) There is a disease control

iii) The method encourages the improvement of the environment

iv) Sedentary live stock keeping enables the farmer to engage themselves in other activities.

This is the practice of keeping livestock for sale. It includes Beef farming and dairy farming on ranches.

– Dairy farming is keeping of animals for production of milk for sale Commercial livestock farming is more developed in the temperate grasslands such as the prairies of USA and Canada, the pampas of Argentina and the downs of Australia.

(i) Commercial livestock farming takes place in ranches which occupy thousands of hectares.

(ii) It is characterized by the application of modern scientific and technology methods.

(iii)It normally involves the use of improved breeds or hybrids in order to advance high yields.

(iv) It is capital intensive, substantial amount of capital is required for farm machinery and fencing.

(v) Large amount of animals is kept for commercial purpose (sale) rather than for subsistence purpose.

(vi) There is little or no migration in livestock farming. This is due to the permanent and reliable food supply (vii) The animals are of high quality and value.

(i) It stimulates the development of other sectors such as industry

(iv) It provides food products such as meat and milk.

(V) They are source foreign exchange.

(i) It involves ranches which are expensive to maintain and establish.

(ii) It needs large areas with scarce population; therefore it cannot take place where the population is high.

(iii) It may cause environmental problems such as land degradation, deforestation.

(iv) It influences climate changes due to deforestation in order to establish ranches. Comparative study of livestock keeping between Australia and Tanzania. Livestock keeping in Tanzania and Australia has some similarities and differences Similarities

(1) Livestock keeping in both countries there are common types of livestock kept. There mainly cattle, goats, sheep and poultry.

(3) In both Countries are practiced at both the subsistence ad commercial levels.

(4) Sedentary livestock keeping is practiced in both countries. This is done in areas that are highly populated .E.g. Chagga in Tanzania

(5) Ranching in Tanzania ad Australia is carried out in the sparsely populated areas. In Tanzania, It is mainly carried out i areas such as Kagera, Tanga, and Morogoro which in Australia this is practiced in the areas. Referred to as outback.

(1) In Australia more scientific methods are employed in the management and running of livestock keeping compared to Tanzania. Australia they use paddocks, animal food supplements and proper animal health care.

(2) Livestock keeping in Australia is more advanced than in Tanzania For example when it comes to use of machinery in activities such as milking ad sheep shearing.

Do solar panels work at night or in the shade?

TOPIC 8: SUSTAINABLE USE OF POWER AND ENERGY RESOURCES | GEOGRAPHY FORM 2